​EVERY NEW ENCOUNTER IS ANOTHER REASON FOR HOPE

The Samburu culture has been pass down from generation to generation thanks to its rich oral tradition and the long hours that pass under the shade of the trees or the gentle breeze with the light of the new moon, but the world keeps turning and the changes continuously  happens at a higher speed. We want to continue to maintain the shade of the tree as a place of encounter and communion, but we increasingly need more and better equipped places,  new "areopagus" like Paul in Athens.

It is for this reason that we are deeply grateful to GAM and its support for the construction of the Training center for leaders here in Barsaloi. It has been several years since the reception and training center became operational for our leaders and pastoral agents, but also for all the neighboring villages; this space plays a fundamental role in the formation, preparation, prevention and projection of religious, social, political, economic and development life of our community.
There are many and varied meetings, seminars, encounters, trainings that takes place there.

From the Barsaloi mission we take full advantage of this space for the planning and evaluation of all our activities, pastoral councils and groups find in this space the best environment for their preparation and formation;  but it is not only the parish that has benefited from this project, constantly from the government and many other non-governmental organizations use this space for the realization of their meetings, training and seminars.

Through this Hall, various meetings had taken place, such as hygiene and health seminars, led by an NGO called Amref, to political and democratic formation of our leaders by the Justice and Peace Committee and the Diocese.

We have also had the possibility to host meetings from committees for the formation of small businesses and micro-credits with another institution called Bomas to emergency meetings to instruct and dodge  the effects of the increasingly frequent droughts.
The adult training school, especially women, has found there a space to share and continue with their training outside the classroom, as well as the environmental clubs we have in each of the public schools.

Women, children, young people, elderly people, warriors and men from the Samburu community have had the opportunity to participate in many and varied meetings in our training center.

Over the years, the frequent use, the strong heat and the constant threat of the termites make us start a project to reform some of the structures of our center in the short and medium term, such as tables and chairs, some of the doors and electrical connections, plus some of the beds and shelves in the bedrooms. We trust in the providence of the Lord that always manifests itself in the generosity of men and women of good will.
This has not only been a hall for doctrine and training, it has also become a space for freedom and equality, where gender, age, language, or educational level are not barriers to expression but on the opposite they are bridges for communion and dialogue.

Thanks again to all of you friends of the GAM Association and again we invite you to continue to be linked with all our projects in favor of development and the proclamation of the Gospel of the abundant life, but with quality and justice as Jesus wants it for all of us.
​

Testimony about the 7th GAM asbl voyage to Ivory Coast, from August 6th to 17th, 2018 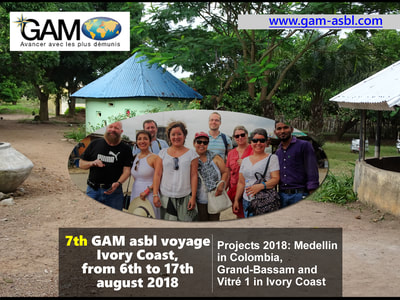 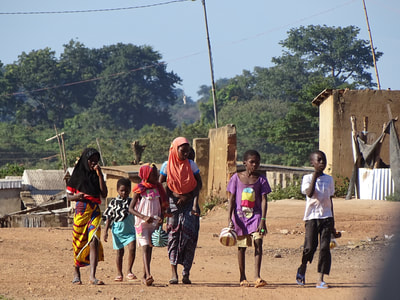 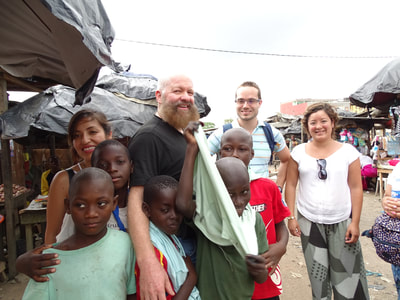 The objective was to discover the projects in which GAM provides financial support and which are being managed by local partners and Yarumal Missionaries.

- Vitré 1, near Abidjan, the training center for young people, where GAM asbl supports the project that is under  responsibility of Padre Andrés Aguirre mxy

- Abobo-Avocatier, is a very lively neighborhood of Abidjan, where the Parish of Our Lady of Cana hosts multipurpose halls financed by GAM asbl for the youth activities.
The parish has begun the construction of a church whose Padre Javier Cardona mxy showed us the plan: as of today, only the supporting framework dominates the neighborhood, but the roof will be added in the coming months.

- Kounahiri, in the north of the country, six hours drive from Abidjan, has several projects en route, largely co-financed by GAM, under the leadership of Padre Arnulfo Vargas mxy: water pump to carry water to the mission and the premises that depend on it; building an "Abattam" (outdoor meeting room); the Alphaplus project for adult literacy and children (it is a region with 60% of illiterates); schooling of children (about fifteen, including two girls); two projects generating income: reception and accommodation of visitors in very pleasant rooms (we tried them!); and production of cashew nuts.
Upcoming projects have been presented to us: creation of a hen farm for eggs and meat, which will be managed by the Kounahiri Women's Association; construction of a sports field for young people; increase the number of cashew trees; improvement of premises for literacy classes.

We participated in the Sunday mass in Kounahiri, in the Mass of the Assumption at Notre-Dame de Cana, in a funeral...
We went to get lost at the Abobo market, between the jewelry stalls, fruit, cassava, pagnes and basins ...
We tasted local food and learned words like "alloko" or "foutou" ...
We also shared a lot of laughter, danced and sung, we admired the colorful loincloths and boubous, haggled ... and opened our eyes to the show of nature, between sunsets and flowers of all colors ...
Everywhere we were welcomed as if we were expected, with smiles and unbeatable availability ...

​Of course, we promised to come back ...
Thanks to the communities of Kounahiri, Vitré I and Abobo Avocatier for the good reception, as well
as the Yarumal Missionaries for their work.